The Dirty Truth About Your Toothbrush 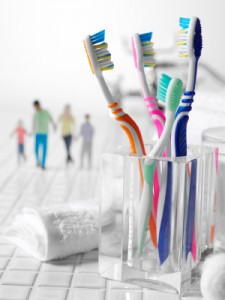 Your toothbrush may be nastier than you think. Find out when to ditch it.  Do you know what’s lurking on your toothbrush?

Your toothbrush is loaded with germs, say researchers at England’s University of Manchester. They’ve found that one uncovered toothbrush can harbor more than 100 million bacteria, including E. coli bacteria, which can cause diarrhea, and staphylococci (“staph”) bacteria that cause skin infections.

Do not panic!!   Your mouth wasn’t exactly sterile to begin with.

“The bottom line is, there [are] hundreds of microorganisms in our mouths every day,” says Gayle McCombs, RDH, MS, associate professor and director of the Dental Hygiene Research Center at Old Dominion University.

That’s no big deal. Problems only start when there is an unhealthy balance of bacteria in the mouth. McCombs says.

“It’s important to remember that plaque — the stuff you’re removing from your teeth — is bacteria,” says dentist Kimberly Harms, DDS, consumer advisor for the American Dental Association. “So you’re putting bacteria on your toothbrush every time you brush your teeth.”

Regardless of how many bacteria live in your mouth, or have gotten in there via your toothbrush, your body’s natural defenses make it highly unlikely that you’re going to catch an infection simply from brushing your teeth.

“Fortunately, the human body is usually able to defend itself from bacteria,” Harms says. “So we aren’t aware of any real evidence that sitting the toothbrush in your bathroom in the toothbrush holder is causing any real damage or harm. We don’t know that the bacteria on there are translating into infections.”

This does not mean that you should not use common sense about storing your toothbrush, including how close it is to the toilet.  Dont brush where you flush.  Most bathrooms are small, and in many homes, the toilet is pretty close to the bathroom sink where you keep your toothbrush.  Every toilet flush sends a spray of bacteria into the air. And you don’t want the toilet spray anywhere near your open toothbrush.

You also wouldn’t eat after going to the bathroom without first washing your hands. The same advice applies before brushing your teeth, McCombs says.

Once you’ve moved your toothbrush away from the toilet, here are a few other storage tips to keep your brush as germ-free as possible:

Know When to Toss Your Toothbrush

Replacing your toothbrush on a regular basis is the best way to limit the bacteria on your toothbrush.  The American Dental Association recommends throwing out your toothbrush every three to four months. If the bristles become frayed or broken down, if you’re sick, or you have a weak immune system, throw it out more frequently. If you use an electric toothbrush, throw out the head as often as you’d discard a disposable toothbrush.

This entry was posted in News. Bookmark the permalink.
Many common replica watches uk nowadays can range between one thousand dollars and twenty thousand dollars. It is not frequently that you will find a replica watches sale that is six figures, as rolex replica uk of that caliber are often special pieces that are made for a specific occasion. replica watches uk are made with a multitude of precious metals, such as silver, gold, and platinum. Unfortunately, most people cannot afford such prestigious materials. Due to the fact that expensive replica watches are so revered and sought after, many people want them, but due to financial restrictions, simply cannot own them. For the average person, the closest alternative to a real, authentic luxury watch are Calatrava replica watches.